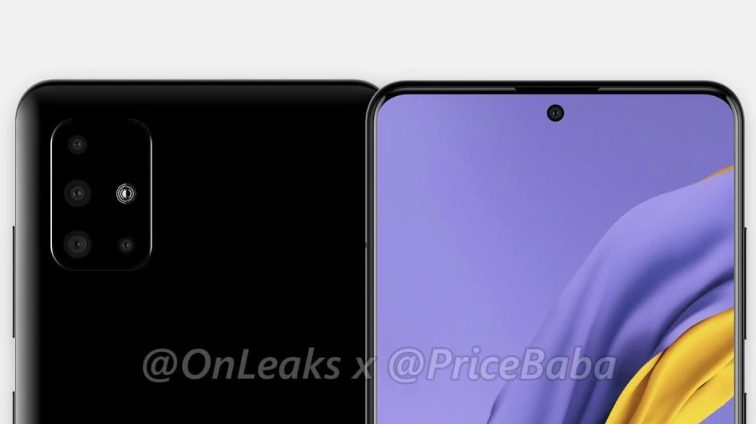 The latest renders and a 360-degree video comes via tipster OnLeaks in collaboration with Pricebaba. Starting with the display, we see that the Galaxy A51 could get a centered hole-punch cutout for the selfie camera much like on the Galaxy Note 10. The display on the Galaxy A51 will be flat and will come with slim bezels according to the renders. Moreover, the Galaxy A51 will retain the 3.5mm headphone jack which can be seen on the bottom next to the Type-C port.

The Galaxy A51 is tipped to come with a 6.5-inch FHD+ AMOLED display, which will be slightly bigger than the Galaxy A50’s screen. Coming to the back, we see a curved glossy rear panel, but it isn’t clear whether it is glass. To recall, the Galaxy A50 was launched with a plastic rear panel in gradient colors.

The quad-camera setup is in an L-shape arrangement within a square module. Three sensors are placed vertically while the fourth is seen just below the LED flash. The camera system is tipped to include a 48MP main sensor, 12MP wide-angle lens, 12MP telephoto lens and a 5MP depth sensor. Like the Galaxy A50, the Galaxy A51 is also expected to come with an in-display fingerprint sensor.

Samsung’s Galaxy A51 is said to be powered by an Exynos 9611 chipset, which is the same SoC powering the Galaxy A50s. It may also come with 4GB and 6GB of RAM with up to 128GB of internal storage.