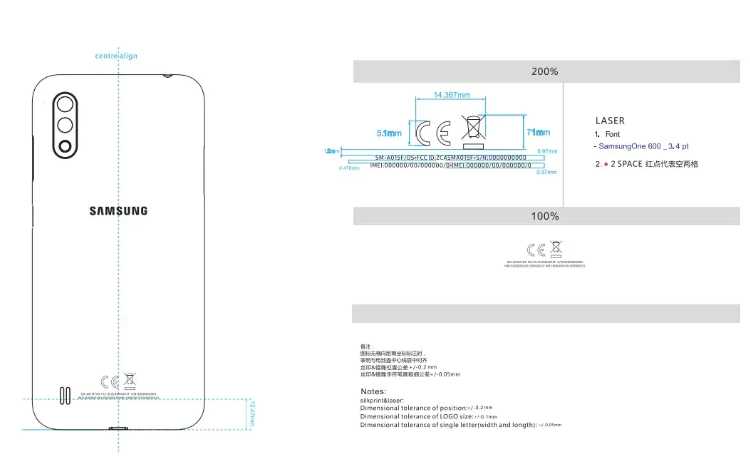 As per the FCC listing of Samsung SM-A015F, the phone will come with 3,000mAh battery and dual rear cameras. The resolution and other details of the rear cameras are unknown at this point. We can also see the presence of a 3.5mm audio jack on the smartphone in the schematics shared on the FCC. No fingerprint sensor is shown on the back, suggesting the lack of biometric authentication, as being an entry-level phone, Samsung Galaxy A01 is unlikely to include an in-display fingerprint sensor.

FCC listing doesn’t reveal any other details about the phone, however, a Geekbench listing indicates that the phone will run on Android 10. Additionally, Geekbench also hints the presence of an octa-core Qualcomm Snapdragon SoC and 2GB of RAM.

Other specifications of the phone are a mystery at this point, however, given the affordable nature of the phone, we expect to see an HD+ display.

Apart from Samsung Galaxy A01, the company is also rumored to be working on Galaxy A51 and Galaxy A71 phones, both of which have leaked in plenty of detail until now. As per leaks, Samsung Galaxy A51 will come with a 6.5-inch full-HD+ screen, 4,000mAh battery, quad rear camera setup, and an in-display fingerprint sensor. Samsung Galaxy A71 is believed to feature 5G support, Exynos 980 SoC, and 128GB of onboard storage.