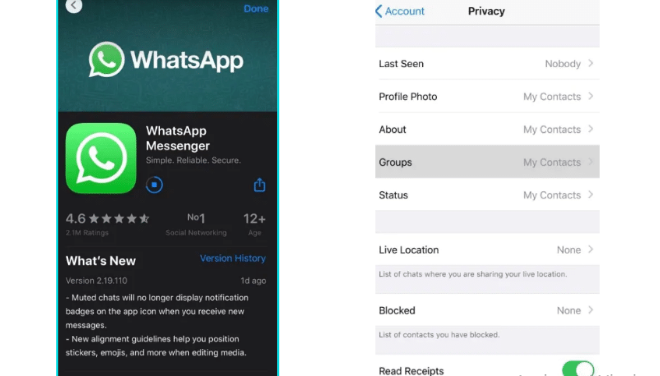 
WhatsApp has released a new version of its iPhone app in the App Store. Carrying version number 2.19.110, the updated WhatsApp Messenger for iPhone includes two major changes and also takes the Group Privacy Settings globally, including the new “My Contacts Except…” option. This is a stable version update, so if you are on a beta version, you will have to leave the beta pool to install the stable version. Separately, WhatsApp has published a new support page for iCloud backup troubleshooting to help users who might be having issues with their WhatsApp for iPhone iCloud chat backups.

As per the official changelog on the App Store, the WhatsApp Messenger version 2.19.110 for iPhone will no longer show display notification badges for muted chats. So, if a chat that you have muted gets a new message, the app icon won’t display a notification badge.

The latest WhatsApp version for iPhone also brings Group Privacy Settings globally. The settings were originally rolled out in India earlier this year. The Group Privacy settings are mostly the same as the ones that were originally released in India, but there is one major change. Instead of the earlier available Nobody option in the Who Can Add Me to Groups settings, WhatsApp had introduced a new My Contacts Except option.