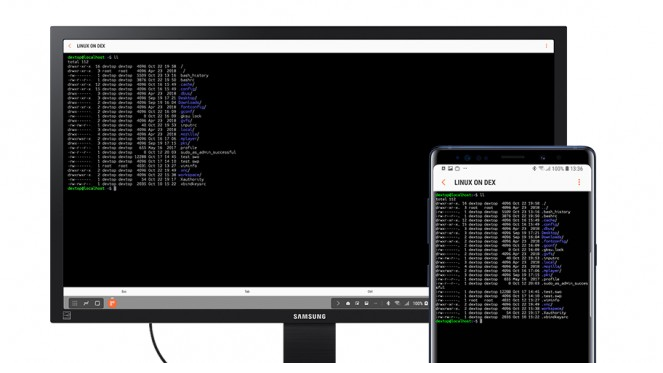 
The Korean giant recently sent out an email to participants in the Linux on DeX Beta program, explaining that support for the Ubuntu distribution previously maintained and customised by Samsung has been ceased.

Thank you for supporting Linux on DeX Beta. The development of Linux on DeX was all thanks to customer interest and valuable feedback. Unfortunately, we are announcing the end of our beta program, and will no longer provide support on future OS and device releases.
NOTE: Linux on DeX will not be supported on Android 10 Beta. Once you update your device to Android OS 10, you will not be able to perform a version rollback to Android Pie. If you decide to update your device to Android 10 Beta, we recommend backing up data before updating.

Linux on DeX enabled the user to get a full-fledged desktop GNU/Linux environment up and running on the smartphone in DeX mode. Specifically, Linux on DeX supported a modified version of Ubuntu 16.04 LTS for ARM64. Linux on DeX was first shown off all the way back at SDC 2017, and the company finally released a beta for download a year later. The feature was intended for developers and not for regular users, as only ARM64 packages could be used on Linux on DeX. It allowed developers to compile, build, and test Android apps on their smartphone itself. Max used Linux on DeX extensively on the Galaxy Note 9 and noted that it pushed the limits of the hardware at that time.

Linux on DeX was also supported on the Samsung Galaxy S10 series and the Galaxy Tab S5e, with its minimum requirements including a Qualcomm Snapdragon 835 SoC and 4GB of RAM. However, eleven months after its release, Samsung has abruptly killed off the beta for Linux on DeX.