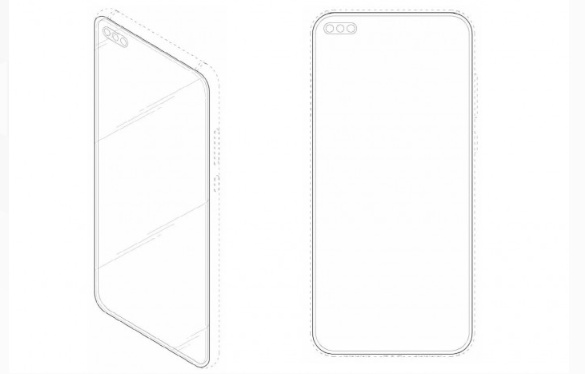 According to the technical patents recently published by the Korean Intellectual Property Office (KIPO), the design of a perforated screen that can accommodate three self-portrait heads is detailed, and we are expected to see it on the S11+ flagship released in February next year.

The patent division does not explicitly mention the specific division of the three cameras, but the foreign media speculation should be similar to Huawei ‘s Mate 30 Pro, in addition to the main front camera has a depth sensor, and may have ultra-wide-angle lens and gesture sensor.

In addition, Samsung can include two new sensors instead of 3D facial sensors for 3D facial recognition and compete with Pixel 4’s Face Unlock and Apple’s Face ID technology. The smartphones sketch also shows all the corners of the thin bezel, and the triple camera itself smaller incision. The punch is on the left side and Samsung should use the AM OLED display.

The Samsung Galaxy S11 is expected to be officially released on February 18th prior to MWC 2020. Samsung is expected to integrate the Snapdragon 865 SoC in its mobile phone. In addition to the 4G LTE model, Samsung may also have a 5G variant. The machine will run an Android UI-based OneUI 2.1 system, 1080 megapixel main camera, up to 1TB of storage space.